Posted on July 4, 2022 by miltonabbashistorygroup 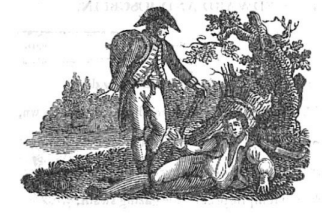 The returning soldier was a common theme in  early 19C literature. This illustration is taken  from an 1803 collection by Whatcombe-born  poet William Holloway.

James Jacob was the third son of  carpenter John Jacob (b 1746). His  father appears to have trained only  James’s elder brother John as a  carpenter; and James was described  as working as a labourer before he  joined the army and as a collarmaker,  harness maker and army pensioner  afterwards.

James enlisted in the army in 1811,  when he was twenty. The cavalry  regiment he joined, the 7th Light  Dragoons, also known as The Queens  Hussars, was possibly then stationed  near Weymouth. It was a cavalry  regiment which had been fighting with  Wellington in Spain. The continental  war against Napoleon had been raging  for seven years and James may well  have joined up for patriotic reasons. He  may also have felt that he had few  prospects if he stayed at home. The  army offered regular pay and rations.

The 7th Light Dragoons sailed for Spain  from Portsmouth in 1813. They  endured a long march from north eastern Spain into France and,  crossing the Pyrenees in the winter,  they suffered severe hardship. They  joined battle with the French, first at  Orthes in February 1814 and then at  Toulouse in April.

They returned to England that summer  and were used in March of the  following year to keep order during the  Corn Law riots in London. Later that  month, the regiment embarked from  Dover for Belgium, and on the 18 June  1815 took a prominent part in the battle  of Waterloo. James was wounded in  the left shoulder, was sent back to  England, and was convalescing in  hospital at Colchester in May 1816.

He was invalided out of the army in  1817 as an “out-pensioner” of the  Royal Hospital, Chelsea. He received  nine pence a day, paid every quarter in  advance. He joined a large number of  veterans of the armed forces who  returned to their homes after the  Napoleonic wars. In 1828, it is said  there were over 85,000 such men in  the United Kingdom.

On returning to Milton Abbas, James  married Rachel Vacher in 1819. They  had one child, a daughter, Jenny in  1820. Rachel was described as a  former button maker in the 1851  census and died the following year,  followed by James in 1856. Jenny  married twice. She remained in Milton  Abbas, and was living with her second  husband, Joseph Vacher, at the Lower  Lodge when she died in 1889.

This entry was posted in Dorset, local history. Bookmark the permalink.